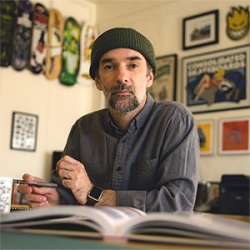 Originally from the Baltimore/Washington area, Gordon attended the Maryland Institute College of Art where he received his B.F.A. in Graphic Design (2001).

In the Spring of 2020, Gordon decided to step down from a Senior Art Director position on a large corporate internal creative team and founded the Alameda-based design studio Plaid Again where he holds the position of Principal Creative and oversees all aspects of the business.