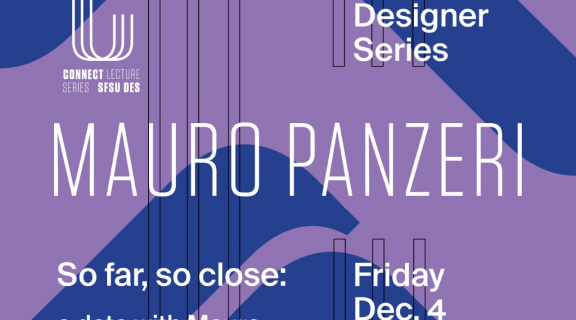 Join our fifth and final virtual Connect lecture of the Fall 2020 Semester!

So far, so close: a date with Mauro Panzeri, Graphic Designer in Milan, Italy.

Mauro Panzeri (1954) graphic designer, lives and works in Milan, Italy. He graduated in Political Science with a thesis in Political Philosophy dedicated to Jean Baudrillard’s thought.

Self-taught graphic designer with initial experience in graphic design studies as an apprentice. From 1976 to 1985 at the Studio Alchimia in Milano, a post-modern atelier of radical design.

Collaborator of Modo, an Italian design monthly; art director of Décoration Internationale, a French monthly, and later graphic designer for Domus, international architecture monthly, under the direction of Alessandro Mendini in the 80s.

In recent years he has been designing corporate identity, books and magazines. He is currently graphic designer and art director of the magazine Materia Rinnovabile/Renewable Matter for Edizioni Ambiente, and art director for the publisher’s products.

Mauro Panzeri has been professor at the Milan Polytechnic for 15 years, Faculty of Industrial Design, Communication Department. He currently teaches Graphic Design for Publishing and Methodology at IED (Istituto Europeo di Design), where he is thesis supervisor in Graphic Design.

He cultivates a personal inclination to reflect on the themes of design and its changes. Critic of “the magnificent and progressive fortunes” of the technologies that have emerged in recent years, he uses them with pleasure for “out-of-time” projects that reveal their way of production.